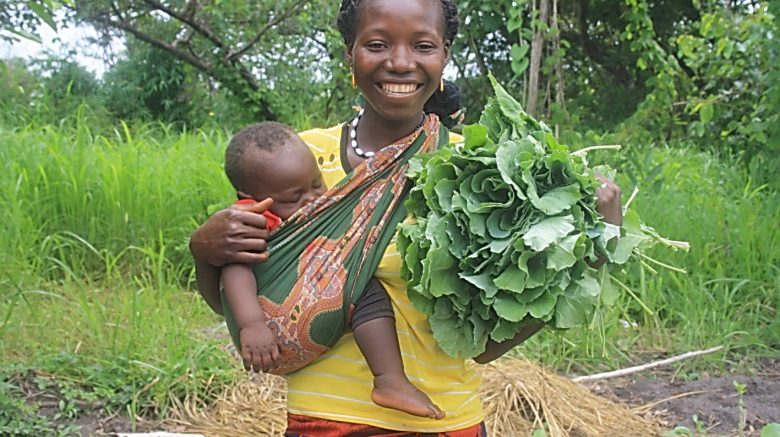 Despite the surge in the new cases of Corona Virus in South Sudan, a young woman in Gangura, a small town bordering Democratic Republic of Congo (DRC) South of Yambio, is determined to turn the path of her life, and the lives of women in her community, through Vegetable production. Ever since South Sudan announced the closure of borders with its neighbours, her community has come to a standstill; the South Sudan border at Nabiapai near to Gangura, has been closed and cross-border business, on which most people in Gangura depend, has greatly dwindled leaving the people scared, frustrated and despaired.

However, not for a young woman, who has stood the tests of times; at 15 years old, she was forced into a toxic early marriage by her parents, and compelled to drop out of school due to early pregnancy.

The warms from her smiles will melt your heart, and behind that smile is a heroine, her name is Santina Nangbavungu, a 22 years old, and a single mother of three, who ones begged for food to feed her children, is now producing vegetable to feed her family and the community.

It all started with the decision to walk out and defy her parents to liberate herself from the bondage of the forced marriage in 2019. She moved out with nothing but her three children. With no support, no shelter, and no food, life could not have been any worse “we could not get food to eat with my children, my family, in the beginning, did not support my decision, and I suffered begging people for food. I would help people in their farms in return they could give what to feed my children,” recalls the jolly mother.

From Childhood Santina had been passionate about farming, equipped with traditional farming knowledge, embarked on agriculture, cultivating a half of an acre, of maize and groundnuts as the only way to find food for her and the children. She remained a worried farmer, as the needs of her three children were not meet satisfactorily.

Star Trust Organization (STO), found Santina, vulnerable as she was, got her enrolled among other women to attend the sustainable skills training in vegetable technologies in Gangura. Since then she got, introduced to different nutritious and lucrative vegetable varieties, such as collards, green pepper, cabbage, carrot, eggplants, and onion. She also learned techniques and technologies in vegetable production, organic pest management, and production of organic manure, as well as basic business skills.

Santina is among the over 400 women in Yambio that have benefited from the United Nations Development Program (UNDP) in South Sudan Supported, Sustainable Livelihood Skills Training (SLST) project with the funding from the Kingdom of Netherlands Embassy in South Sudan.

The right skill at the right time, Santina replicated the skills as she acquired from STO, agronomist on a small piece of land barely quarter of an acre, on which she has been able to grow, collards, Okra, amaranths, eggplant, and cabbages. The yields are giving her already the wings to fly and earning respect in the community, as being the only one, who can readily supply vegetables at any time, the community needs.

Her business skills are paying off, “I cannot run short of money now, I earn on a daily bases. The demands for vegetables is so high. My customers come home whenever they need, and I run to the farm and supply them, or else I collect the vegetable and bring to the roadside, where people buy so fast” Said Santina. She earns on average, 1000-1500 South Sudanese Pounds daily since she started selling from her farm last month.

The nutritional needs of the children are her priority, she can now afford to feed her children three meals a day, with high nutritional valued vegetables and supplemented with meat that she can afford from her vegetable revenues. Besides feeding, she easily affords to take care of her children’s health and clothes as well. “No one takes care of my children; I am the sole provider and God. I want to thank STO for the skills that they have given me”

She is not stopping at attaining her family food security; Santina is a farmer with big dreams. From the money she earns, she is planning to increase her vegetable farm to half an acre, and she is already making savings of 500SSP from any earnings above 1000 SSP intending to buy a bicycle that will help her transport her produces to markets in Gangura and Yambio.

The young mother is a born leader, she is so generous with the knowledge that she has acquired, she is already training her neighbours with the skills that she learned and argues other vulnerable women to come to her farm to learn modern farming skills.

Her generosity does not end with agronomic skills, STO incorporated COVID19 preventive messages into the training, in which the trainees acquire knowledge of preventions, signs, and symptoms and are now promoting the measures in the communities in Gangura. And for Santina, she is leading the way in sensitizing her community intensively. “Being a border town, Gangura is a high-risk area, sensitizing the community is a noble cause. We are afraid for the safety of our children, as a mother I must make sure that everyone gets the message,” said Santina. Every customer who visits Santina’s home and the farm is made to wash hands with soap that she can now afford to buy and she takes time to talk about the COVID19.

She is not alone in the revolution of horticultural entrepreneurship in Gangura; for the 24 years pregnant Maria, she is not worried about the future of her unborn baby. “I have been eating well since I learned these skills, and my unborn child is kicking healthy as well. I am confident that I will be able to take care of him/her since I have the skill to grow cabbage and other vegetables. I am not worried anymore of my livelihood; I am praying that COVID19 ends so I can produce a lot of tomatoes and cabbage for outside markets” Said Maria, one of the women who attended the training with Santina.

“The future is bright for us; my daughter will not have to worry about food or money for her studies. Since I acquired this skill, it has changed my relationship with my husband. He no longer disturbs me nor beat, as we are both becoming equals. I can bring food on the table as much as he does. I choice vegetable production because, everyone needs to eat and they will always buy healthy and nutritious vegetables for their families” said the confident Julie, 20 years old and mother of three. 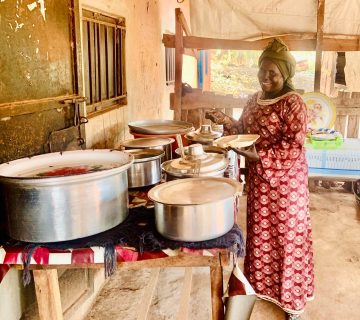 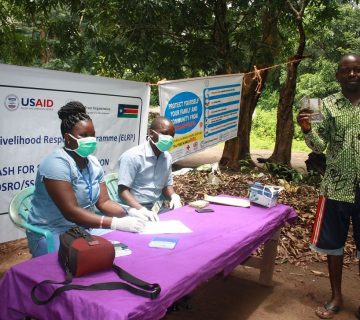 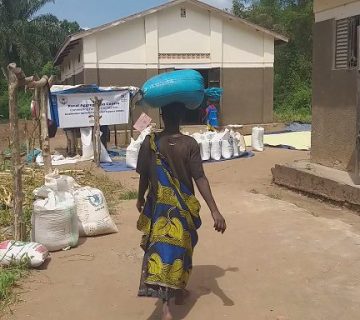 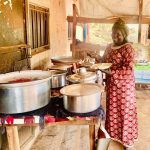 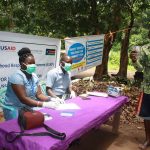 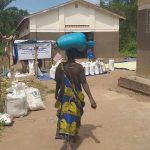